Joy.  What brings you joy?  As a Christian one of the greatest joys I can experience is when someone I personally know is reunited with their heavenly Father.  They were an outsider, like the prodigal son, but now they are home.

This Sunday we will learn about the disciple Andrew and how he experienced this joy by being obedient to God.  Come join us as we learn how to better reach our “one”, and the joy that God gives us when someone new comes into the kingdom.

This is he of whom I said, After me cometh a man who is become before me: for he was before me.

And I knew him not; but that he should be made manifest to Israel, for this cause came I baptizing in water.

The next day John was there again with two of his disciples. When he saw Jesus passing by, he said, “Look, the Lamb of God!” When the two disciples heard him say this, they followed Jesus.

Turning around, Jesus saw them following and asked, “What do you want?”

They said, “Rabbi” (which means Teacher), “where are you staying?”

So, they went and saw where he was staying, and spent that day with him. It was about the tenth hour.

Andrew, Simon Peter’s brother, was one of the two who heard what John had said and who had followed Jesus. The first thing Andrew did was to find his brother Simon and tell him, “We have found the Messiah” (that is, the Christ). And he brought him to Jesus.

Jesus looked at him and said, “You are Simon son of John. You will be called Cephas” (which, when translated, is Peter). 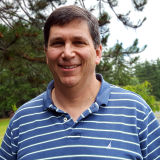